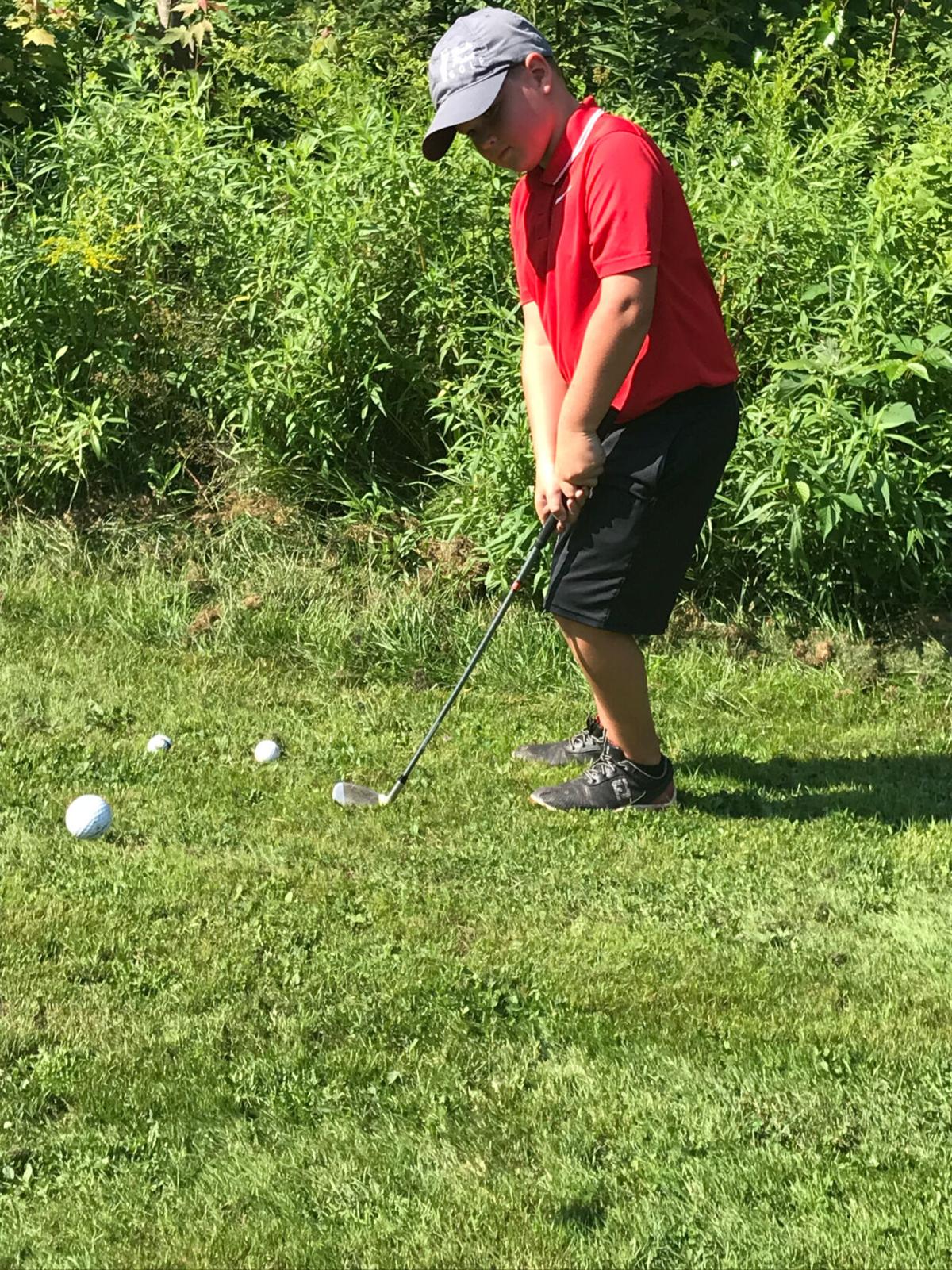 Borden Nicholson chips a golf ball at a training area at his home near Caribou. (Goodwin photo) 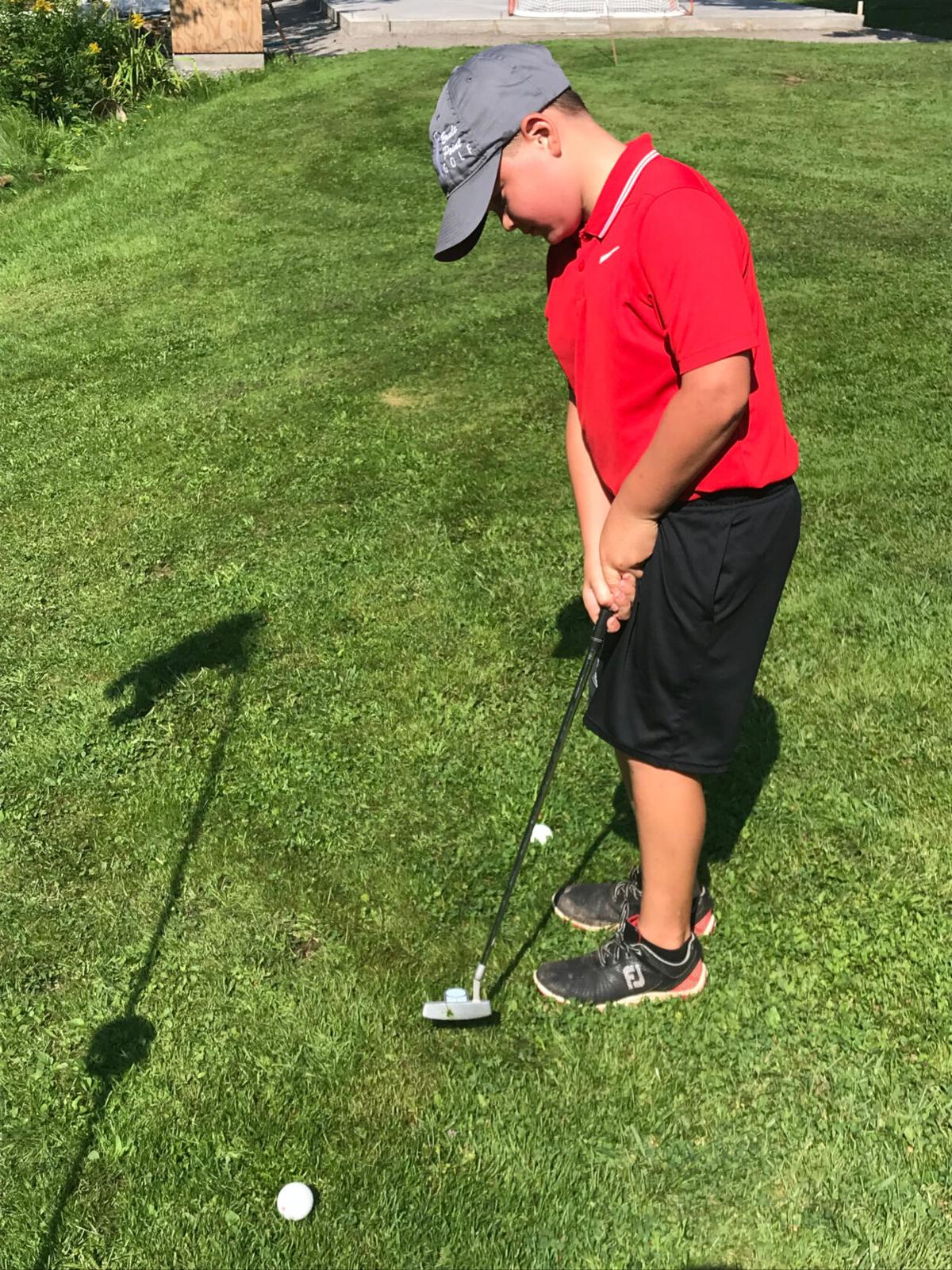 Borden Nicholson works on his putting at a practice green in his back yard. (Goodwin photo)

Borden Nicholson chips a golf ball at a training area at his home near Caribou. (Goodwin photo)

Borden Nicholson works on his putting at a practice green in his back yard. (Goodwin photo)

Borden Nicholson is adding to the debate whether great golfers are made or born.

The eight-year-old golfer from the Caribou area is showing plenty of talent on his own after recently winning a provincial drive, chip and putt skills competition at the Brule Point course where he and his parents play. It has earned him a trip as one of 171 young golfers to the national junior skills challenge hosted by Golf Canada on Saturday and Sunday in Caloden, Ont., northwest of Toronto.

It follows a win in eight and under boys during a regional skills competition at Brule Point and being ranked third in Canada in his age group.

“It was a shock to get the phone call,” his mother, Rachelle, said. “It will be a great experience for him.”

The venue is the TPC Toronto course at Osprey Valley in Caloden. Categories include boys and girls eight and under, nine to 11, 12 to 14, and 15 to 18. It’s the result of Golf Canada selecting the top four in each category on Aug. 3 and inviting them to compete in the 2021 event.

“It’s fun,” Borden said, while working on his short game at practice facilities his parents have assembled for him. “I’m looking forward to playing the course.”

Borden was accompanying his parents on their golf trips to Brule Point and began golfing in the club’s junior program this year.

“I like driving but my putting is pretty good,” he said.

He recently visited Abercrombie Country Club with his father, Andrew, for a round of golf and scored 119 over 18 holes.

“He’s just a little guy but he’s got a natural, full golf swing,” King said. “He’s got the fundamentals. He’s got some great genes, and he certainly has the potential to be a really good golfer.”

Borden also has an impressive golf lineage, besides his father. His great-grandfather was Borden (Mutt) MacKinnon, who played in Pictou and was considered a good golfer. He is remembered for winning the men’s championship at Pictou Golf and Country Club so often that the club gave him the trophy to keep.

“Obviously Borden is named after him but he also picked up his natural talent and skill for golf,” said Rachelle, who is Mutt’s granddaughter.

Bob Wong, a member of the Nova Scotia Sports Hall of Fame for his contributions to golf including many years when he was rating golf courses under the Slope system, remembers MacKinnon as a competitive golfer.

“He was one of the top golfers to beat in Pictou at the time,” Wong said. “I thought he had an all-round game, a good short game and a good putter.”

Wong later discovered MacKinnon considered him a good golfer, too. He had been golfing at the Pictou course for several years and remembers MacKinnon asking him to go to a sand trap on the ninth hole to let a photographer from Nova Scotia tourism take photos of him to help promote the province.

“They had photos of me chipping the ball high in the air and onto the green,” Wong said. “Sometime later I discovered I was pictured on the inside cover of Time Magazine.”

Steve Goodwin is never without his camera and a notebook. He has been covering news and sports in Pictou County for more than four decades.