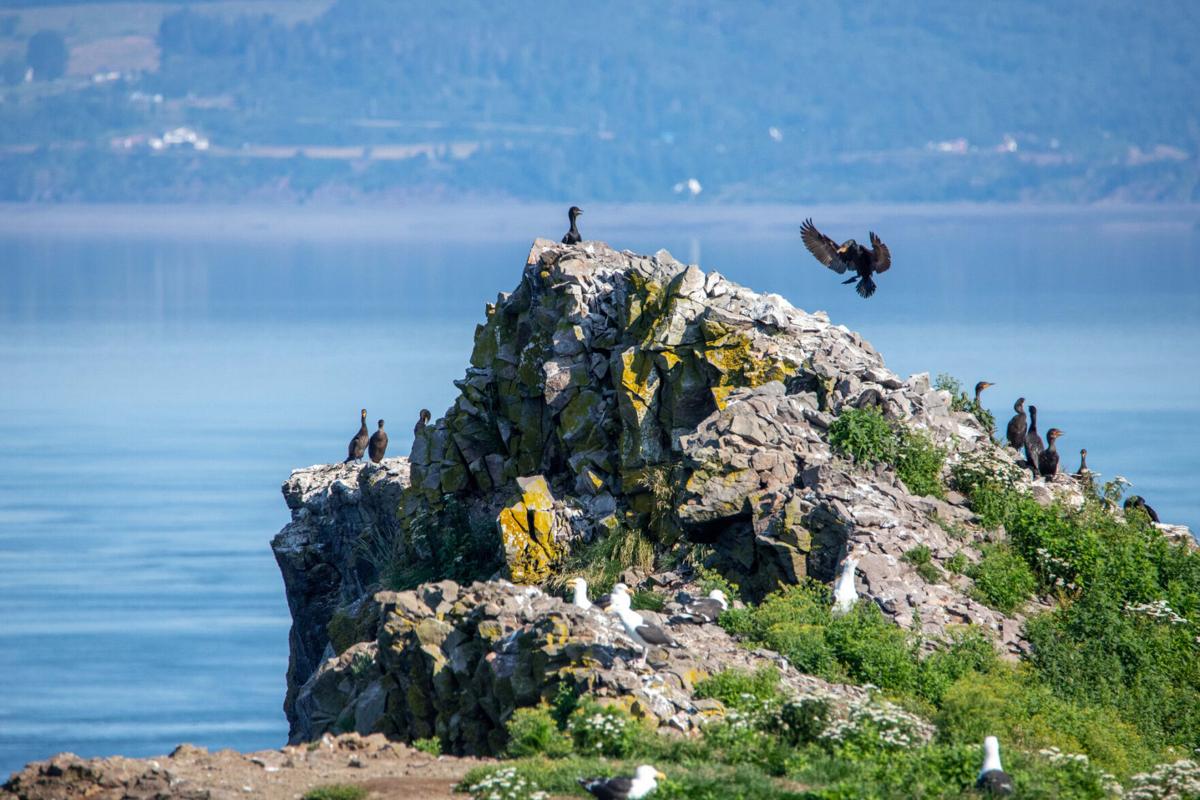 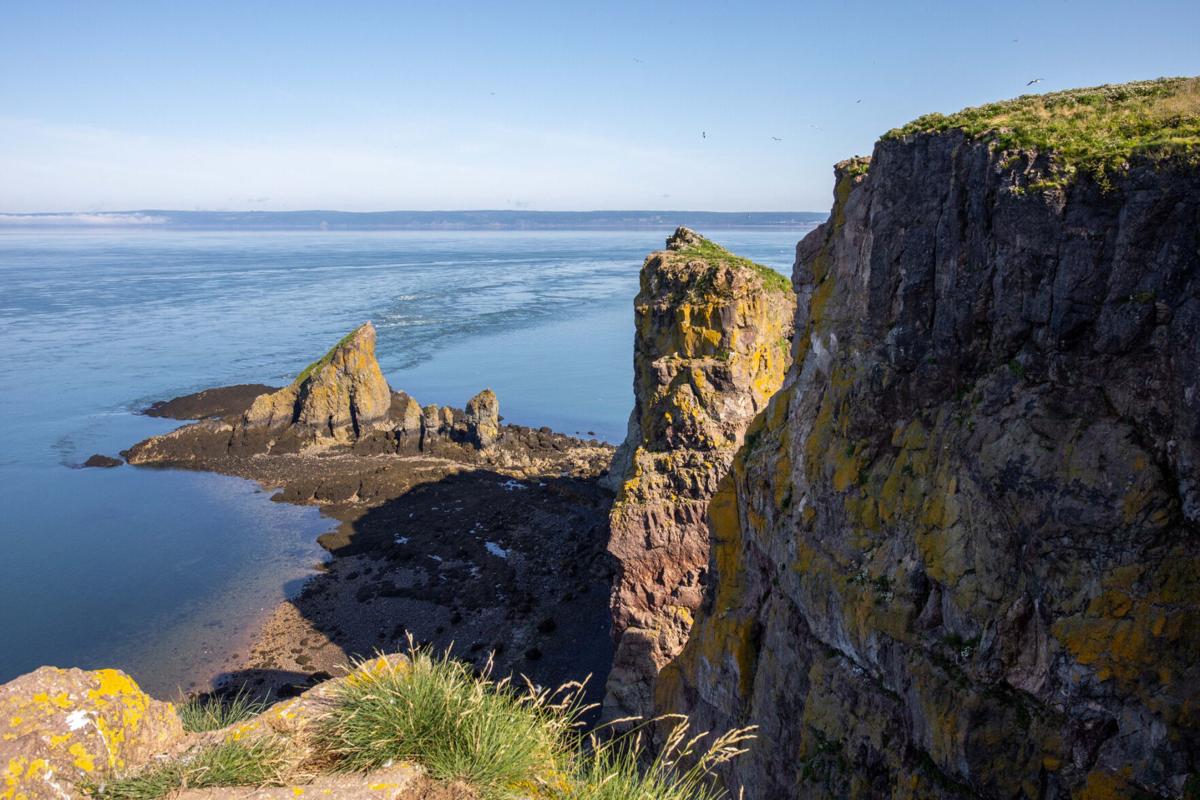 If the Bay of Fundy were a whale, Cape Split would be the harpoon in her side, a jagged point of basalt rock shredding the world’s highest tides as they pour into the Minas Basin, further narrowing an already narrow pass, just north of Scots Bay.

While Cape Split itself is a charming exchange of cathedral hardwoods with old growth flavour and stunted evergreens entwined with wet rock, its very tip is instead a natural meadow, abruptly open on this staggering exchange of ocean water, always cascading east or west. Caught in this torrent is a line of grassy islands speciated from the Cape Split by millennia of erosion, their separation appearing so miniscule that even sane men are tempted to jump the gap. Straight down over every edge is a 60-metre drop, unobstructed and unambiguous.

It’s a place of high energies, where the various forces of nature grapple in perpetual combat for our viewing pleasure. Approach with the proper humility, and it will make you feel small. Approach at the proper time of day, and you’ll see the fastest animal on the planet.

On the aforementioned islands nest colonies of seabirds, gulls and cormorants blanketing each peak, but on the July morning I studied this turning mass of birds I saw something peculiar—a flying pair conspicuously smaller than the rest, tearing through these colonies with reckless speed. They turned, one swooping over my head while the other cut across my line of sight, bars of dark feathers streaked over its eyes like warpaint. There was no mistaking the peregrine falcon, once eradicated from Nova Scotia and then reintroduced, their few breeding pairs reclaiming ground along the Fundy coast. They can move 300 kilometres per hour, and can be found in precious few places.

Cape Split deserves its reputation as a provincial treasure, hiked for decades by enthusiastic locals while remaining remarkably unspoiled, undeveloped and rugged. Most who’ve hiked these sacred seven kilometres do so with the assumption that they’re in some way protected by the provincial government, but until very recently, that wasn’t true.

In fact, for the majority of its fame, Cape Split was privately owned, its 427 hectares originally two separate properties over which visitors tromped without explicit permission. That this cape would remain wild and open to the public was in no way assured.

The Annapolis Valley Board of Trade proposed this region become a national park as early as the 1940s, and, in 1974, it was declared a site of ecological significance by the Canadian Committee for the International Biological Programme. When Nova Scotia’s Wilderness Areas Protection Act came together in the 1990s, citizens from across the province, and especially in the Annapolis Valley, insisted that Cape Split be added to the growing list of properties considered for protection, inundating the process with letters of support. In 1995, no less than the Municipality of the County of Kings formally requested Cape Split be promptly purchased and protected, recognizing its value to residents and tourists both.

It wasn’t until 2002, however, that purchasing began, the province of Nova Scotia acquiring its first 280-hectare chunk that year, followed by another 147 hectares in 2007. Cape Split was officially public land, but then something weird happened. The province decided to manage Cape Split as though it were a provincial park, going so far as to draw up a management plan in 2009, construct a parking lot, erect washrooms and establish a trailhead, but they did all of this without actually designating Cape Split as a provincial park. It had the management plan, the amenities, but didn’t quite have the legal safeguards.

The province has a long history of these “half-designations,” bringing its properties into the final stages of parkhood without taking that last legislative step, leaving these proto-parks in a sort of regulatory limbo, wherein they are simultaneously safe and still at the mercy of government will. Cape Split stayed like this for 12 years, enjoying the privileges of a provincial park but without the title.

When Cape Split Provincial Park was finally announced in 2019, the news elicited more confusion than anything. So deep had these 427 hectares imbedded themselves in the identity of Nova Scotia that their protection felt oddly self-evident, a thing beyond dispute, but there is very nearly nothing more fragile than one’s natural heritage. To appreciate that sad fact is to be very grateful for this delayed designation.

The trails that once snaked, lawless, overtop this superb assortment of vista and stone are now being tamed, upgraded and reorganized into something safe and sensible, many of their diversions taped off, the equipment of absent work crews appearing on occasion throughout the hike. It will take you 4-5 hours out and back, without counting the stretches of meditative bliss you will spend at the very tip, which I insist you reach early in the day when you can have it all to yourself, and when the motions of bird, wind and water clash against the indomitability of basalt in the golden light of dawn. Sit in the grass and close your eyes, and feel the low roar of sacred places.

Zack Metcalfe is a freelance journalist, columnist and author active across the Maritimes. This article was supported, in part, by Nova Scotia Tourism.