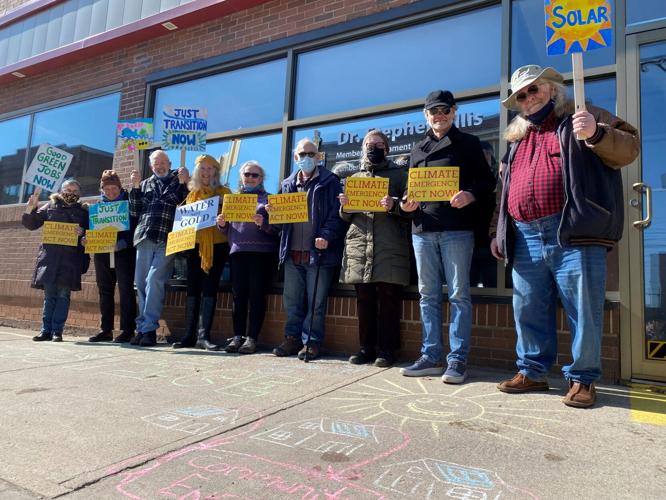 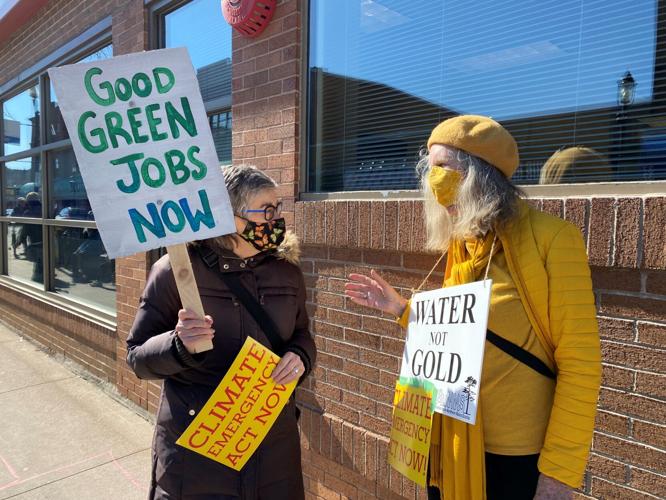 Carol Ferguson, left, talks with Madeline Conacher during the Council of Canadians North Shore chapter’s participation in the Climate Emergency Days of Action.

Carol Ferguson, left, talks with Madeline Conacher during the Council of Canadians North Shore chapter’s participation in the Climate Emergency Days of Action.

North Shore residents are doing what they can to support a just transition to clean energy.

Roughly a dozen residents from the Council of Canadians North Shore chapter, based out of Tatamagouche, spent some time outside Cumberland-Colchester MP Stephen Ellis’ offices on Friday and Saturday, many holding onto signs supporting a clean and sustainable society.

“The climate emergency is something that’s been on my mind for 15 or 20 years now,” said Michael Jensen, who lives in Waldegrave. “It’s nice to see it recognized as an emergency situation, but we’ve been in one longer than (15 to 20 years).”

Jensen says government action is needed for a radical decrease in petrol energy and increase in more sustainable options.

“We need a descent of power, agriculture and community to where we’re localized and strong locally in helping our province become sustainable,” he said.

While Ellis wasn’t present at his Truro office on Friday, Jensen said they wanted to be there anyway as part of 350 Canada’s Climate Emergency Days of Action.

“The timing seemed right,” said Jensen, noting the local group was scheduled to meet with Ellis this week.

Tatamagouche’s Wilf Bean is hopeful the group will be able to encourage Ellis to vote in favour of a just transition, one that will see oil workers and Alberta win in the end as the nation moves away from fossil fuels.

“And hopefully we’ll get to talk to people here already, people coming by. We want to make ourselves visible.”

Although not a member of the Council of Canadians North Shore chapter, Madeline Conacher “supports everything they do” and wanted to join in on Friday’s stand.

“I’m very concerned about the environment in Nova Scotia. The Liberals and Conservatives are all talking about it and say they’re concerned, but their policies aren’t saying that yet. I’m focused on all these issues.”

Conacher is a member of Sustainable Northern Nova Scotia, or SuNNS, which was created in response to possible gold exploration and mining in the French River watershed. Members of SuNNS pushed the Municipality of Colchester County to request protected status of the watershed, which the province just recently approved.

“Climate change … I see it every year,” said Carol Ferguson. “The difference in temperatures, the arrival of spring and winter. It’s horrifying to see what happened in B.C. this past year.”

She says she’s concerned about Nova Scotia as a coastal province, as citizens know sea levels are on the rise.

“What are we going to do? It’s a matter of life and death,” she said. “It’s important every individual do what they can, even if they think it’s not big enough.”

Raissa Tetanish has been a journalist for the past 15 years, and has spent four years as editor of both The Light and Hub Now. She joined the Pictou Advocate in April 2021.